I have to start this post out by saying that I’m sorry I wasn’t able to post the rest of the time we were in Orlando. We had to switch hotels and we were much farther away from the free wifi, and if you have ever been to Disney, by the time you get back to the hotel your done for the day. We would get back to the hotel and barely be able to walk from the living room to the bedroom, our feet and legs were done for the day. So now that we are back at home in VA I bring you a recap of the rest of our vacation.

We woke up on Day 5 and headed out to Magic Kingdom for the day. The park was packed, ive never seen so many strollers in my entire life. I guess because we were closer to Thanksgiving a lot more people were heading to Disney for the day. OH, and I should also mention that it was freezing cold. The mornings and evenings it was into the mid 50’s and we even hit the 30’s. We were lucky to have a couple of sweaters in the trunk because we hadn’t planned on a crazy freak cold spell. Ok back to Magic Kingdom, the wait for a lot of the lines was about 70 mins so we didn’t get to do as many rides, but Magic kingdom didn’t really have a ton of rides we wanted to do so it worked out in our favor. We rode Space Mountain and watched the Disney Philharmonic in 3D, it was really cute. The highlight of the day was seeing “Mickey’s A Night Before Christmas”. Here are a couple of 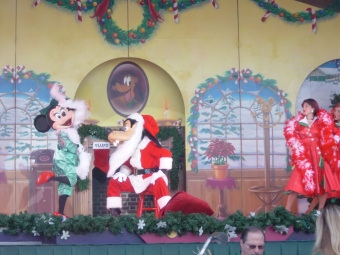 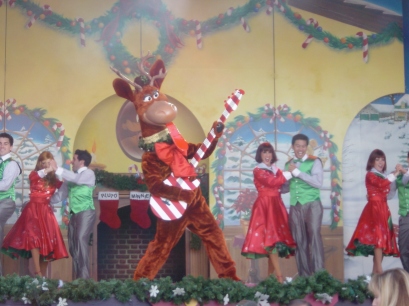 After the show we were able to take in a parade, ride a couple more rides and then make it back to Epcot in time to do some of the stuff we missed the day before. They just opened up a new Finding Nemo ride that was amazing. The ride was really cute but the best part was a thing they called “Talk to Crush”. Crush is the turtle from Nemo. They brought us into a little room with a screen in the very front that had the sea on it. Crush came out and talked to us but the coolest part was that he would ask the kids questions and interact with them. We don’t have a clue how they did it but it was one of the neatest things we have ever seen. We also got a really funny pictures afterwards of us getting eaten by the shark in the movie. It turned out really cute.

We woke up in the morning and the Disney Vacation Club picked us up. We wanted to check out what their timeshare plans had to offer and how it works. It was a really great meeting and we got to take a tour of one of the resorts. It was beautiful. After the meeting they dropped us back at our resort. We headed to our room and when we got there saw that there was some stuff outside our door. We thought that was a bit odd so we decided to make sure everything was ok. A VERY long story short we found out that we had messed up our days and we were supposed to have checked out that day and not the next like we had thought. So we in a mad rush packed up everything and checked out. Then we had to check into the next resort. We checked into the next resort and found out that the person that booked our trip for us had set it up to where we had to do another time share meeting for this resort. We weren’t too upset about it and figured it would be good to see what they had to offer. So we set up our meeting, and checked in then headed out to MGM for the day.

The highlights of MGM were of course Tower of Terror and Aerosmith’s Rockin Rollercoaster. Now for those that know me you know that both of these rides are not something I would normally ride and you are right. I did it though. I loved the rollercoaster and even rode it again. I did ride the tower of terror but didn’t want to do it again. David was so proud of me for riding it though so he told me that for riding it I could get any shirt that I wanted. I was very proud of myself. Here are some

Us After the Rockin Roller Coaster

Us With The Tower of Terror 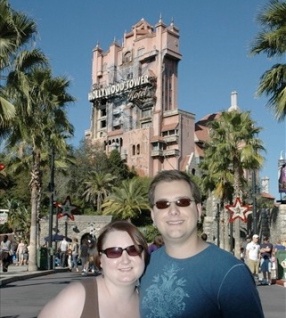 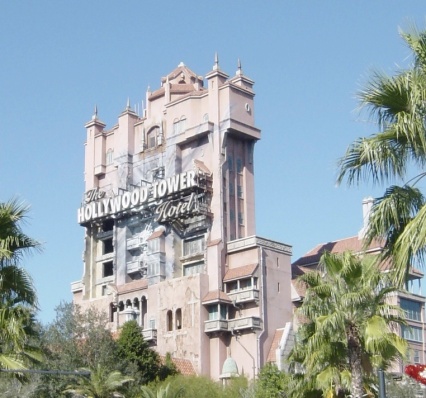 And Disney’s Fantasmic. If you ever get to go to Disney you have to watch this show. A lot of the show is projected on water. There is a parade of floats on water and tons of fireworks and fancy lighting tricks. We loved it. 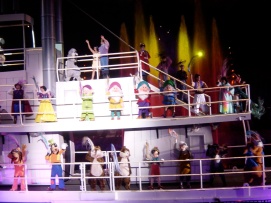 We woke up and went to our second and final timeshare meeting. This meeting didn’t go so well. I won’t go into all of the details but the closer in them meeting decided to cross a line and personally attack me. Needless to say I will be making some phone calls and he will be loosing his job over it. After this meeting David and I decided that we weren’t going to let this ruin our vacation and moved on. We did Universal’s Islands of Adventure for half the day and hopped back over to MGM to do some of the rides we didn’t get to do the day before. We got some really great pictures check them out

One of our favorite rides is Spiderman. We had the opportunity this time to get our picture with him this year. 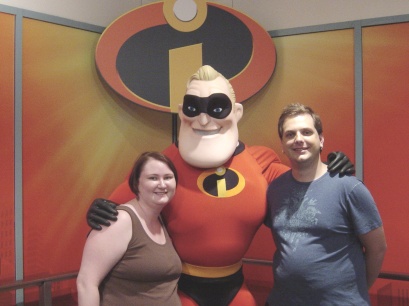 And of course we had to replicate the picture from our first trip to Universal on our honeymoon in 2004. Here we are at the park gates 2006

Universal also added a new show called Fear Factor Live. This show was crazy. I really enjoyed the stunts but the animal stuff and the eating weird/gross stuff was pretty nasty. They cast the show about two hours before the show and pick random people from the park to compete. They started out with the first stunt which was an endurance hang. They were suspended in the air and had to hang on and try to outlast the others.

One really crazy thing they did was they had this volunteer from the audience, they put her head in a box and put six scorpions on her head. If you look really hard in this pic you can see the scorpion in her cheek area. I could barely handle watching this stunt.

In the next stunt they had one person suspended on a harness and another person down on the ground with a bucket. The person hanging had to throw baby octupus down to their partner who had to try and catch it in the bucket.

And of course we had to get our picture with the Universal Globe. I will point out in this picture I am wearing my new hoodie I got for riding the Tower of Terror. 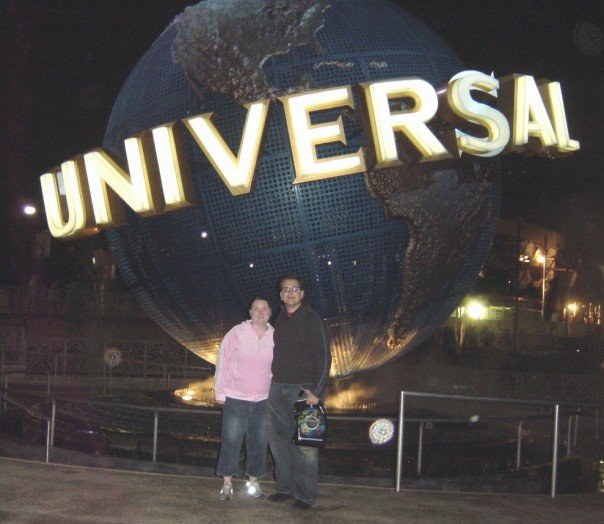 Well we had a blast on our vacation but I am glad to be home sleeping in my own super comfortable bed and nice warm shower. Ahh the comforts of home.

This site uses Akismet to reduce spam. Learn how your comment data is processed.